Go Directly To Rewards
Welcome to the PledgeManager for Doomtown: Weird West Edition!
If you missed our campaign, don't dismay! Just choose an option below.

Doomtown: Weird West Edition is a poker-driven, territory control card game, updated from (and fully compatible with) the 2014 release of Doomtown: Reloaded, which was based on the 1998 Origins Awards Best Trading Card Game, Deadlands: Doomtown by our friends at Alderac Entertainment Group!

Doomtown is an expandable card game set in the Weird West of Pinnacle Entertainment’s legendary Deadlands setting. Players control one of six unique factions: they fight for dominance, sling lead, and cast spells in town and beyond. It is typically played with two players, but multiplayer variants allow more players to get into the game. We're excited to offer new co-operative and solo modes in this Kickstarter.

During the game, each player builds locations in the town and fights for overall control. Doomtown sets itself apart from other card games in that each card doubles as a playing card, which impacts both deck building and gameplay. Players resolve certain in-game situations (such as combat) with a hand of poker, accentuating the Old West atmosphere of the game. The game's movement rules are also noteworthy, often being compared to chess.

What is an expandable card game?

Unlike card games that distribute cards via randomized booster packs, the Doomtown: Weird West Edition Base Set will have 2 copies of each card. Each Doomtown expansion has 4 copies of every card. This ensures that all players have access to all of the same cards. There’s no rarity system or scouring secondhand markets for the card you need! Promotional cards offered as prizes at organized play events are all alternate artwork cards that play the same as the original cards.

Deadlands is the award-winning Weird West role-playing game setting from Pinnacle Entertainment Group. Mysterious beings called the Reckoners have given life to monsters and magic, causing history to change. California has shattered into a labyrinth of flooded sea-canyons, and a mysterious super-fuel called ghost rock has spawned as much war and strife as it has steampunk devices.

What are the factions?

“White hat” deputies and sheriffs bring order and justice to the untamed West. Their decks tend to be based around awarding bounties to their opponents and having “legal” draw hands in shootouts. They can make use of Mad Scientists and Blessed in order to help bring peace to the frontier.

“Black hat” criminals on the wrong side of the law. Their decks tend to be based around racking up bounties on their own dudes and having “cheatin’” draw hands in shootouts. They sometimes dabble in magic through Hexes to pull off their crimes.

Ranchers and profiteers willing to do whatever it takes to make a buck…and eliminate the competition. Their decks tend to be based around playing deeds and outmaneuvering their opponents, and often make use of horses and Mad Science gadgets.

Forces of evil seeking to spread fear and despair, largely responsible for bringing the “Weird” to the West! Their decks tend to be based around controlling their opponents through magical Hexes and recruiting abominations. Sometimes they find or invent mystical items and gadgets.

Native Americans and their allies seeking to bring balance to the world and drive off those who oppose their way of life. Their decks tend to be based around controlling the Town Square at the center of the play area and planting Totems for their Shamans to use. More recently, some of them have started to learn the secrets of Kung Fu.

Individuals who don’t care much for rules and want the West to stay Wild. Their decks tend to be based around outmaneuvering their opponents and using Kung Fu. A surprising number of Blessed from various faiths have joined their ranks as well.

How does Doomtown play?

Most cards in Doomtown have a suit and a value, just like a traditional poker deck. Spades are Dudes, Hearts are both Goods and Spells, Diamonds are Deeds, and Clubs are Actions.

Before the game, each player builds a deck containing 52 cards and optionally two Jokers that can be used as wild cards during shootouts. Decks cannot contain more than four cards of the same suit and value (e.g. 8 of spades), leading to tradeoffs for what cards to include.

Additionally, players select one of the six factions and an Outfit representing their faction’s overall strategy. They begin each game with up to five Dudes from their deck on the table, who occupy their Home location represented by the Outfit.

Players alternate playing cards from their hand and moving their dudes to deeds placed on the table, or to the town square at the center of the play area. If a player moves dudes with Influence to an opposing a deed, they take it over and gain its Control Points. The original owner can send their own dudes over to retake it, which might lead to forming posses for a shootout!

When the bullets start flying, players draw a minimum of five cards from their deck. Dudes present in the shootout may allow the player to draw more cards at the outset, or redraw cards after they discard ones they don’t want to keep. Each player then makes the best five-card poker hand they can, and the player with the stronger hand wins the shootout, with the loser having to take casualties based on the results!

Check out our Learn to Play section for more info on how things work!

- Shooting Range: A Mulligan addition for new or veteran players that can be combined with any other Town Square marker and alternate Greenhorn victory.

- Gomorra: A Fear Level variant in which a countdown clock is used to ensure a conclusion to the game when Control Points are not being added.

- Deadwood: A control variant for creating conflict at deeds.

New ways to play with your existing collection, including Solo Play and 2 vs 1 Co-Op.

Over 260 Unique Cards (520+ total cards in each Weird West Edition box) including:

Comprehensive 40 Page Rulebook: Including the latest rules, FAQ and fiction for each faction.

Doomtown Online is a way for you to play Doomtown against players around the world via a browser based virtual format. This is free to use and you can import decks from the Doomtown Database deckbuilder at dtdb.co. All Kickstarter backers will receive special digital perks (card backs, promo versions, play area images, tokens) once the final version of Doomtown Online is ready. Check it out here.

The FAQ is now live. We invite everyone to hop on over to the Doomtown Discord where Pine Box staff, playtesters, and fellow denizens of the Weird West can answer any of your questions and show you the game on the new Doomtown: Online platform. 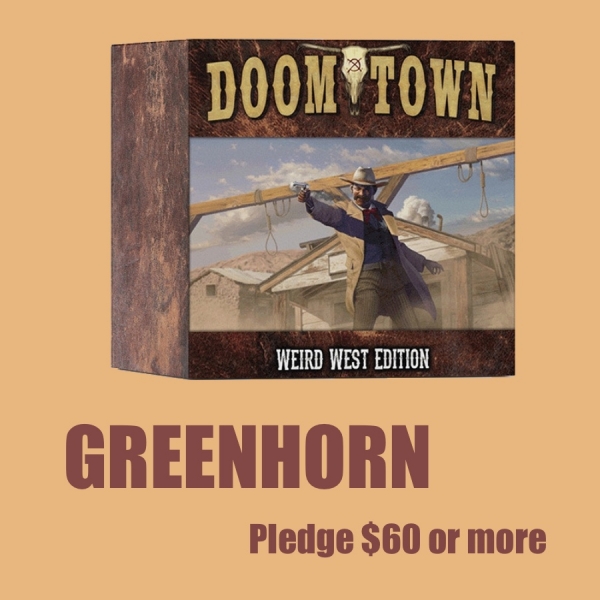 1 copy of the Doomtown: Weird West Edition Base Set for Doomtown! This is for entry level players and includes 2x of each card, enough to build at least 3 playable decks. One Base Set is all you need to have fun!!! 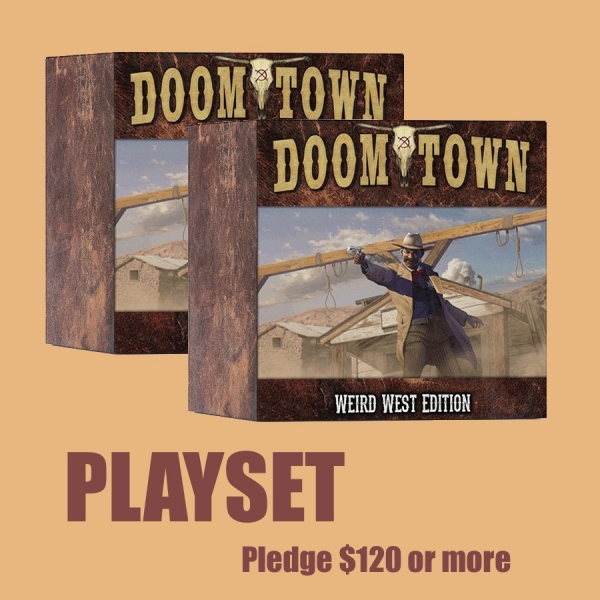 2 copies of the Doomtown: Weird West Edition Base Set. Back at this level to obtain a playset (4x of every card) for maximum deckbuilding options and 12 Jokers to cover your decks for all 6 factions. 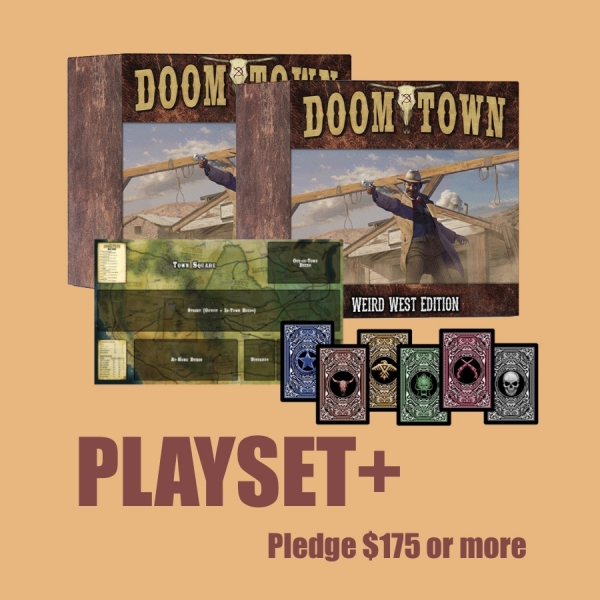 2 copies of Doomtown: Weird West Edition Base Set for a full playset along with all 6 packs of Faction Sleeves and the new Weird West Playmat.

One last step to go!

Share your email, we will send you an invite!

If you're already have a PledgeManager account from another project, just sign in using the button below to join the project.

Complete your information below to get started!